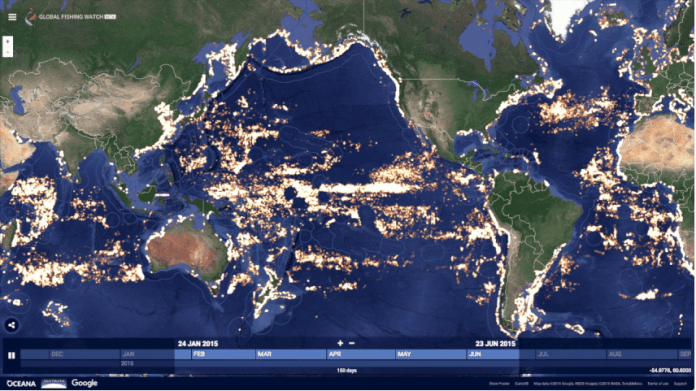 Exciting developments from the Indian Ocean, as eight East African coastal countries have combined to turn the screw on illegal fishing.

FISH-i Africa, supported by the Pew Charitable Trusts, supports the nations to share vessel data in real-time. By also offering access to satellite tracking expertise, the task force enables authorities to identify and act together against large-scale illegal, unregulated and unreported (IUU) fishing.

The example given here features the unravelling of a $1.6m fraud case, but the potential is much broader.

Cash-strapped countries can struggle to keep pace with the burgeoning growth of illegal fishing fleets, so innovation is becoming increasingly essential to maximise available resources. And the FISH-i Africa initiative does just that, with collaboration making the programme much more than the sum of its individual parts.

The term ‘Big Data’ can conjure visions of banks of whirring supercomputers and massive data warehouses, but the tools and techniques developed at the top end of business and academia are increasingly in evidence in many more places.

As article author Ishveena Singh rightly points out, when you combine the spread of this data science and artificial intelligence expertise with the growth in availability of imagery of the earth from space, you have a good news story for many commercial and scientific disciplines.

The Blue Economy examples here include Global Fishing Watch daily tracking of 22 million ocean vessel location logs every day – data which is made available to everyone from governments to citizen scientists.

Also referenced is SkyTruth, the small West Virginian not-for-profit who used satellite data computations to alert the world to the true size of the BP Deepwater Horizon oil spill was the spill was at least 20 times bigger than what was being claimed.

The rapid advent of the new space era – where space functions from launch to satellite data download are moving from large government programmes and into the hands of commercial enterprises and SMEs.

These companies also include many launching the own small satellites specifically to collect more – and more varied – geospatial data. So, the trends we see highlighted here are only set to continue, which is of great benefit to all those involved with the Blue Economy.

And it’s not just satellite data that is powering AI Blue Economy progress; ports are at it, too.

The AI smarts enabled the system to detect problems and automatically suggest alternatives to cut down port congestion. What’s not to like about that? Like many parts of our lives, ports are looking to become another sector where success is driven by hidden, high-powered computation.

When you consider that Channel 5 can take in such a diverse range of data on potential disruption as weather forecasts, nearby traffic, handling equipment breakdowns, strikes and other labour issues at terminals and estimated volumes of incoming cargo – you begin to understand the power of the beast.

UK releases Code of Practice for autonomous vessels (via Safety4Sea.com)

An important step forward for autonomy this week, as several months of dedicated work resulted in the launch of a UK Code of Practice for autonomous vessels.

The expansion in use cases and take-up of autonomous ocean vessels has seen them drift towards the edges of standard regulations, leaving oversight bodies faced with the challenge of supporting innovation at the same time as ensuring safeguards are fit for purpose.

Please check back next week for more Blue Economy Technology news. Or just subscribe via email below.