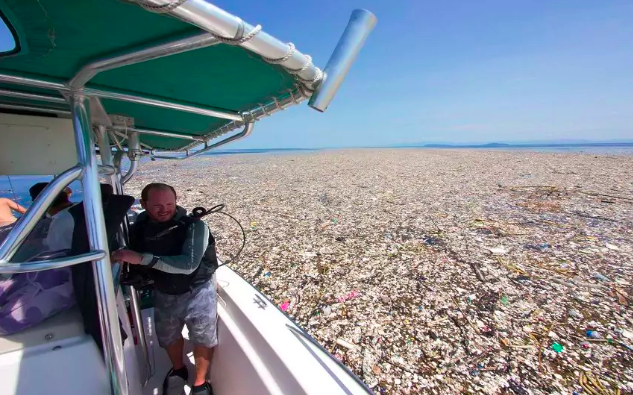 Plastics are doing enormous damage to our seas and oceans and this remarkable photo from the Caribbean Sea is but one stark example of countless around the world.

Clearly something has to be done and it’s pleasing that public awareness is growing as we mentioned in an earlier BETB.  It makes one wonder whether such a large mass of plastic waste can be seen from optical and synthetic aperture radar sensors on satellites; well worth investigating … we’re on the case!

Electronic Chart Display and Information Systems (ECDIS) are at the heart of the IMO’s eNavigation concept and the mandating of digital navigation that commenced in shipping from 2012 onwards.

eNavigation is transforming shipping operations with efficiencies ranging from weather routing, to improved port turnaround times and locational data that is vital for global logistics chains.

It is, however, indeed the case that first generation ECDIS systems leave much to be desired in terms of user interface and ease of operation.  It is also the case that navigators should be properly trained in the use of their specific ECDIS type (there are some 36 different Original Equipment Manufacturer commercial systems at sea and some companies have several types in their fleets) and to be fully aware of its capabilities and limitations.

Unfortunately, training is expensive, it’s difficult to spare staff for courses and inevitably complacency creeps in.  We should therefore expect to see more events and stories of this kind. Might more flexible, eLearning solutions help to bridge the gap? Is anyone stepping up to this challenge?

Cefas and the University of Exeter have come together to catalyse research in sea animal health, food safety and protection of aquatic environment. With the world’s population set to increase to almost 10 billion by 2050, providing future generations with safe and sustainable farmed seafood is the critical aim to be addressed by the Collaborative Centre for Sustainable Aquaculture Futures.

Launching the centre, Environment Secretary Michael Gove said, "The new centre not only establishes our position as a world leader in marine science and sustainability, but will prove critical to the health of our fisheries and the economic vitality of our coastal areas – helping us in our continued drive to leave the environment in a better state for the next generation."

Great news for the profile of aquaculture within the UK’s Blue Economy infrastructure.

Tracing system an issue for IUU fishing (via the Bangkok Post)

News in Thailand highlights the importance – and continued challenges – of traceability in fisheries.

The country was first issued with a ‘yellow card’ by the EU in 2015 (further extended in 2016), for not taking sufficient measures in the international fight against illegal fishing (IUU). Should the situation not improve, the EU could resort to banning fisheries imports from Thailand, which Thai officials say are worth up to US$1 billion a year.

Among other issues, fish from Thailand do not contain information identifying which fishing boats or equipment were used to catch them.

Thai authorities have invested energy in revised licensing and certification processes, ahead of the next EU decision point in March 2018.

NLA is currently researching new technology solutions to assist with fisheries traceability, so watch out soon for more on this issue.

And finally, there was much consternation recently as the existing OECD classification of Small Island Developing States (SIDS) meant that hurricane-hit islands in the Caribbean were unable to benefit from critical aid money.

That situation arose because the majority of small states fall into the middle- or high-income category, calculated on GDP per capita. However, that assessment did not reflect vulnerability to economic and environmental shocks.

St Lucia Prime Minister Allen Chastanet signals here that a new classification for SIDS will be revealed in full soon.

Much has been written recently on the potential of technology transfer to SIDS, but tech investment funds are always susceptible to the significant budget pressures caused by environmental disasters. Having the surety of global aid programmes in place will hopefully enable a longer-term view.

Check back next week for more Blue Economy Technology news.