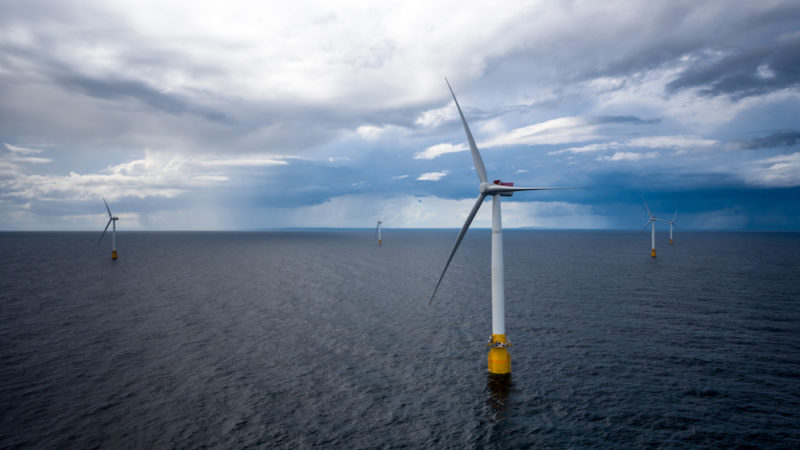 Floating to a shore near you soon?

Great offshore news this week, as the Scottish grid started to take in energy from a windfarm 25 kilometres off the Peterhead in Aberdeenshire – a 4km2 floating site that hopes to provide power for 20,000 homes.

Hywind Scotland claims to be the first company in the world to launch such a floating windfarm, a move that significantly broadens the scope of renewable energy, as it creates the potential to push further out from shore, into much deeper waters.

Congratulations and best wishes to all involved.

We highlighted Project Loon in #BETB_4 and can’t resist updating this project again, not least as it provides a very real, innovative solution to the very real connectivity challenges confronting Puerto Rico in the aftermath of Hurricane Maria.

It’s difficult to avoid being excited about this type of HAPS (High Altitude Pseudo Satellite) technology; Project Loon’s balloons have a geographical coverage of about 5000 square kilometres enough to cover an area three times the size of the Shetland Islands.

World View’s stratollites, a similar capability, can handle a payload of around 1000 kilograms, there’s no need to space harden the sensors, a relatively abundant power pack can be provided and, even better, the sensors can be recovered on completion of the mission.  What might be done with a multi-function HAPS platform fitted with SAR, optical, AIS and satcomms?

Following hard on the heels of the much-discussed cyber attack on Maersk Shipping back in June, shipping company BW Group announced in the past few days that their cyber defences had also been breached over the summer.

While the full nature of the attack has not been reported (though BW did say that it was not ransomware), BW insists that the issue is fixed and that they managed to conduct 'business as usual' during the unauthorised intrusion to their systems.

Maersk estimated that the cyber attack they endured could cost it $300m, but no estimate has yet been placed on this latest attack.

Cyber security has long been an issue, but the growing emergence of the digital, connected ship brings more risks as well as opportunities.

Speaking at the launch of a September cyber security conference, Peter Broadhurst, Senior Vice President Safety & Security Services, Inmarsat, said: “Hacking, ransomware and system outages have long been a concern for the shipping industry, particularly with the advent of the Internet of Things (IoT) and the connected ship. These risks are heightened due to the significant growth in networks of physical objects accessed through the internet”.

Hawaiian and American Samoa marine sanctuaries and monuments received a boost this week, as a new tech-led collaboration was announced to protect and preserve them.

Between them, they will deploy the Wave Glider USV for a range of environmental monitoring and surveillance activities, including focusing on Illegal, Unreported and Unregulated fishing; water quality and marine debris; coral reef damage and bleaching; and climate change

The announcement of this exciting and long-term project bodes well for the use of autonomous vessels in Marine Protected Areas.

Another recent eye-catching autonomy announcement emanated from Scandinavia, where the Norwegian Maritime Authority revealed plans to establish a new area specifically for the testing of autonomous vessels.

Only 0.5% of South Africa’s marine territory under protection (via www.TimesLive.co.za)

We’re always keen to highlight new global gains in the size and scale of marine protected areas, but the South Africa National Biodiversity Unit this week issued a timely reminder to counter-balance the continued signs of progress.

Calling for the creation of a number of new Marine Protected Areas in South African waters, senior scientist Gcobani Popose highlighted that 10 out of 13 offshore habitat types were critically endangered and needed enhanced protection urgently.

South African land habitats are afforded much greater protection than marine environments, with 7.8% of the country’s land covered by some form of protection, compared to 0.5% of the oceans.