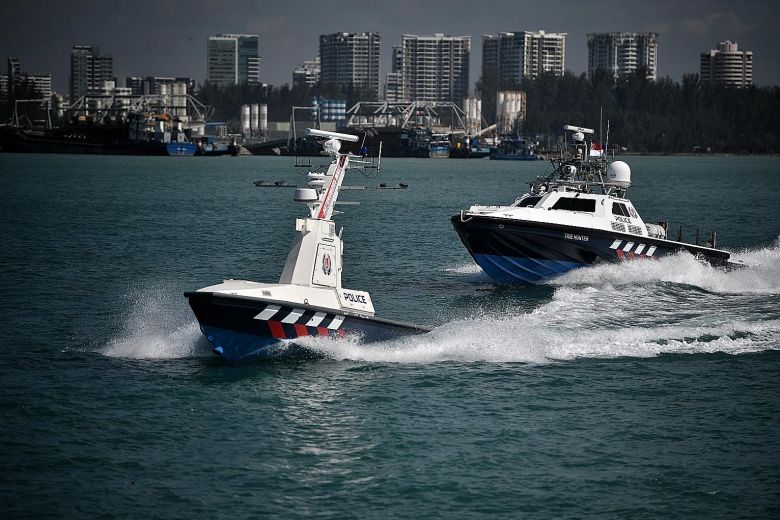 An Unmanned patrol boat leads the way off Singapore

Two unmanned Surface Vessels (USVs) have been on trial in Singapore for just over a year now, with their progress celebrated by the Singapore Coast Guard recently. The 9m and 16m vessels form part of a ‘multi-layered defence, bolstered further by a range of additional technologies (315 CCTV cameras, electro-optic cameras, radar systems), some of them land-based.

While many innovative technologies boast of being ‘disruptive’, as more USVs move into full deployment, it is becoming increasingly apparent that their greatest impact may be as a complementary technology. They will provide lower-cost or more persistent surveillance options in specific areas; they will survey areas of scientific interest before or after full manned survey boats, to help to target or follow up on that larger investment; they will collect data in harsh environments during winter months when conditions are hazardous to human crew.

The Singaporean USVs are very much in line with this – able to patrol autonomously as a visible deterrent, but also used to alert and activate human assets where needed.

As ocean drones proliferate, marine wildlife are getting a bit annoyed, via Oceans Deeply

On the flip side of the USV coin, however, a team at the Monterey Bay National Marine Sanctuary were keen to point out recently that the full implications of unmanned systems are still being learned.

Airborne drones (UAVs) are cheaper, more prevalent and more readily available to the average consumer than USVs. This means that many more will be used by hobbyists who may not be as clued up as they should be on relevant civil aviation or environmental policy. Locally, that includes the need to adhere to the Marine Mammal Protection Act, which prohibits disturbing marine mammals, be it by kayak, helicopter or – increasingly – aerial drones.

Research already indicates that seals, sea lions and walruses are more susceptible to noise disturbance from drones at low altitudes. While more research is needed, the concern is that drones could disturb feeding or rest patterns if not properly regulated.

Clearly, we will see many more education and public awareness campaigns in the coming months and years, such as the easy tips offered by AliMoSphere. This will hopefully lead to UAVs (and, indeed, USVs, if and when they become affordable) being deployed safely alongside more conventional marine science techniques.

At the close of the year, Los Angeles Mayor Eric Garcetti launched the start of construction for the La Kretz Blue Economy Incubator.

Citing the incubator as a place where “scientists, educators, policy makers, and entrepreneurs” can collaborate, the 35-acre campus will be located in City Dock No. 1, one of the Port of Los Angeles oldest sections.

We noted with interest as more and more elected officials talked up the potential of the Blue Economy, and this is being increasingly backed up both in policy and with the launch of Blue Economy incubators and accelerators.

Other recent examples to watch include centres in New York, the Port of San Diego, and Dartmouth in Canada. We’ll keep our eyes peeled for more in 2018, and to see what innovative new products and services emerge in due course.

Here at NLA we’re great believers in the potential power of citizen science, where the large numbers of the general public are empowered to contribute to scientific discovery, often via digital means.

One of our favourite earlier examples was in another domain, when Cancer Research UK successfully harnessed volunteers’ efforts to analyse millions of digitised cells, a task that would have taken them many months using traditional analysis techniques. They achieved a much quicker turnaround, however, by turning the cell analysis into a space-based mobile shoot-‘em-up game, with players urged to zap cells that looked abnormal. This in turn meant that those cells / ‘asteroids’ that received the greatest number of ‘hits’ were most likely to be abnormal, so were accelerated for further analysis.

Such an approach – specifically, harnessing the sensor and processing power of citizen’s mobile phones – has recently been applied in coastal Virginia, to allow everyday citizens to help improve the mapping of tides. The app – created by Virginia nonprofit Wetlands Watch – allows groups of volunteers to submit GPS coordinates and photos of floods to local project leaders.

Another example is Seagrass Spotter, which allows citizen scientists to track seagrass meadows around the globe, via a smartphone app.

The key to such initiatives –as with the launch of any mobile app – is discoverability, so we hope that larger organisations with broad networks and media reach will collaborate with app innovators to launch many more similar schemes.