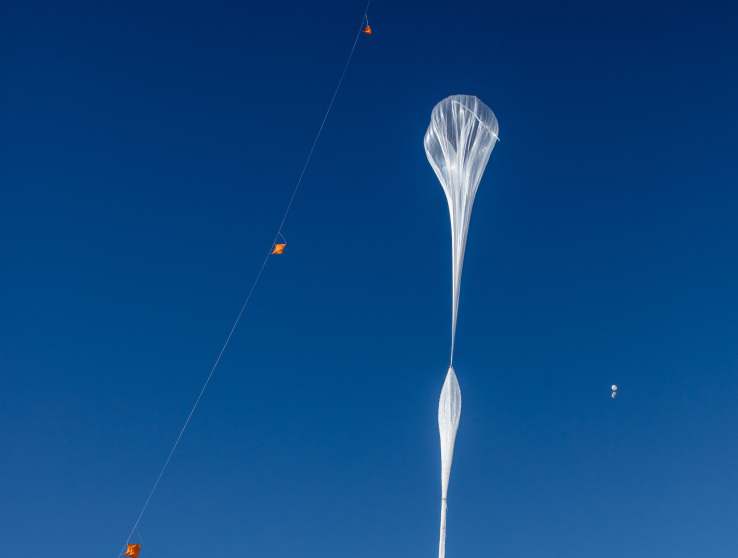 Stratollites are very exciting, offering very cost-effective platforms for deploying earth observation sensors and communications nodes on the edge of space without all the need for space hardening the technology.

Even better than that, the potential payload is massive and sensors can be recovered to earth for upgrading and re-tasking on mission completion. The main challenge, though, will be to hold the stratollite overhead a geographical area of interest for long enough periods to make the investment worthwhile. Stratollites… hopefully coming to an airspace near you in the near future!

Effective marine protection: More than just lines on a map (via National Geographic)

A very welcome contribution to the Marine Protected Areas debate from  Fanny Douvere of the UNESCO World Heritage Marine Programme.

With the aim firmly established of 10 percent of the world’s ocean to be protected through governmental mechanisms by 2020, the policy and operational focus undoubtedly shifts from establishment to enforcement.

Fanny lists many of the previous leaps forward in establishing Marine Protected Areas, but we would also point to the just-published research that showed that a co-ordinated programme to protect fisheries in the Philippines’ Tañon Strait yielded an economic investment some 30 times the level of the original investment.

So, the lines are drawn and the economic argument for investment is developing. We also hope that aligning, testing and proving the value of innovative technology approaches also continues apace.

We were especially pleased to see the article mention radar and satellite monitoring for remote surveillance, as we feel these have the potential to offer great Return on Investment, allowing for the kind of enhanced monitoring, control and surveillance capabilities that could not be achieved by investing in sea-level technologies alone.

While the recent growth in awareness of the plastic waste phenomenon in our seas and oceans is timely and very encouraging, it is research such as this that exposes how little we know about the scale of the problem. Our scientists know enough to be worried – probably quite worried – but, in truth, they don’t have sufficient data to know how worried they should really be.

We therefore need data, lots of it, and with modern technology we can all be data gatherers.  Earth observation from satellite sensors is potentially transformative and goes a long way to providing a strategic picture of the marine environment, especially when operated in tandem with ground truthing autonomous technologies to create SMART connected ocean frameworks.

Those frameworks are evolving, but real progress will be made when marine scientists and environmentalists work in close partnership with all maritime operators (everyone with business on the seas) and all seafarers (shipping, fishing and leisure) to gather and share marine environment data as freely as possible.  It doesn’t matter what the technical process is called – citizen science and/or crowd sourcing – we have the technology in the form of GPS, sensors and connectivity. Let’s get on and make it happen!

Why we should use the tech start-up model to solve environmental problems (via mnn.com)

Environmental journalist Starre Vartan argues on the Mother Nature Network that there is much to learn from lean start-up model of the tech start-up world.

Some tech envangelists can be a bit blinkered as to the all-powerful potential of innovative approaches, but Starre reassuringly reminds us that “not all tech ideas are genius — some of them seem useless, ridiculous or both.”

This provides extra solidity to her embrace of Conservation X Labs (CXL), launched by conservationist Alex Dehgan in 2015 and which aims to act as a start-up accelerator for environmental technologies. She draws particular attention to their newly-launched collaborative online platform, Digital Makerspace, where everyone involved in environmental technologies can convene to share ideas and identify opportunites for collaboration.

CXL won’t just be an engineer’s talking shop, though. Specific requests for environmental solutions will be posted on the site from groups like the WWF and the U.S. Department of the Interior.

Worth checking out; we look forward to seeing this initiative grow in the coming months.

This week, we were delighted to travel to beautiful Kota Kinabulu in Sabah, Malaysia, to attend the 10th Cooperation Forum (CF10) of the Cooperative Mechanism Between the Littoral States and User States on Safety of Navigation and Environmental Protection in the States of Malacca and Singapore (SOMS).

The main public output from the event was the announcement of the launch of a second phase of a joint hydrographic survey, agreed jointly by between Singapore, Indonesia, Malaysia and Malacca Strait Council (MSC) of Japan. The second phase of the survey will cover the remaining areas of the Traffic Separation Scheme (TSS) within the SOMS which are shallower than 30 meters.

NLA were there to present an overview of the UK Space Agency’s EASOS programme, an innovative data service that will support Malaysia to use satellite assets to counter the combined environmental threats of illegal logging, flood devastation and oil pollution in the Straits of Malacca.

We were both hugely encouraged by delegates’ support of and interest in the EASOS programme, and impressed with the focus and scale of ambition of the Cooperation Forum. Truly collaborative gatherings of multiple governments, NGOs, academia and – crucially – industry stakeholder groups – are always great to find.

We extend our heartfelt thanks to EASOS and the Malaysian Marine Department for the invitation.